I wasn't really sure where to post this, but this seemed to be the best place.

So, I am currently designing a game that will function as a Choose Your Own Adventure kind of story. It’s still in the very early stages, but I had an interesting thought when I came to the character creation system. I don’t have any issues with the technical aspects of it as far as coding/scripting goes, but…well, how many options should the player have? How many do they realistically need? I think name and gender should always be included, but how much more? My game won’t have options for class and race because I’m using a classless system, and the character is always human.

I was thinking adding in options for things such as hair color, hair style, eye color, and starting clothing at least. But should I add more options? I considered giving the player an option to choose their character’s face shape, mouth shape, nose shape, and etcetera, but then I couldn’t really think of a natural way to call this or bring it up later in the game, other than on a stats menu that lists the player’s appearance or when the player looks in a mirror or reflective surface. Also, how many options for each category is enough?

The problem is that, at least in terms of game mechanics, setting these options for appearance usually doesn't really change much of anything (unless we are getting into a really complex dating simulator or something of that nature). They are basically only there for player immersion, but in a text-only game, it's left up to the player's imagination to visualize those traits anyway. I also think having too many options can be a bit overwhelming, especially for players who just want to get into the story as quickly as possible (for them, I’ll make a random character system so they can skip the minute details). Anyway, I thought a lot about it and looked through the forums but didn’t really find anything that addressed this question. In the end, I decided the best way to get an idea of what I should do is to get a bunch of opinions!

I guess my question boils down to this: when you play a text adventure, what kind of character creation systems do you prefer? What options are a “must” for you, and what options do you like to see? Is there anything you have never seen implemented but think would be awesome, or anything that you DON’T particularly like?

Thanks in advance for any replies; it will really help me out.

I am totally new to game design, but the simple answer is: it depends on the game and/or the customers/players of it and/or on you in the amount of work you want to do and/or your ability to code/program in such advanced/complex large scale systems.

If it helps immersion in a positive way, than it's positive, obviously.

Create everything you need...
Do not create anything you do not need...
Start with the basics...
Add more as you need...

As for "different" generator, check out my "The Adventure, from the inside"
It was a demo, just to see if I could, and (hopefully) shows the generation from the character's
point of view...

This is a huge topic, and table top RPGs might be a place to go for inspiration.

Only includes options that will have an impact on the game. Sex so the right pronoun can be used, name so characters can refer to you by name. Everyone expects that. After that...

Will hair colour or style every be used? They are in video games because the player can see them, but not text games. If combat is important, then strength, agility and stamina may be important. Perhaps intelligence for magic. If personal interactions play a big roll, charisma could be. Take a look at a Choose Your Own Adventure and see how simple that is.

I will just take this chance to pimp my own game, so you can see what I did:
http://textadventures.co.uk/games/view/em15b32xd0o-y-ysvgrtcg/deeper

An alternative approach would be to give the player background options, as I am doing in this game (currently unfinished). The various options change the player stats, which are actually the same as Deeper:
http://textadventures.co.uk/games/view/14ynzvspr0ex6dgvbdjvqw/the-sun-queen

And here is a game that I have not got beyond character creation; it is done as a form, and you can click on the questions to change the answers:
http://textadventures.co.uk/games/view/xhzhv186qekchqag1_f6uq/the-intern

technically, the graphical physical characteristics in an amazing 3d graphical game are just as irrevelent to the game play as textual/attribute physical characteristics in a text adventure game. They're doing the same non-neccessary functionality of providing imagery for the characters' (and the rest of the game's 3d world too) physical characteristics for the person playing the game. Obviously textual/attributes require more of your brain understanding of them and its imagination for that imagery than the use of graphics (well... now that I'm thinking about it, biologically actually not, as the brain still does roughly the same work for graphics as for textual, meh). If we take this further... graphics are completely irrelevent to the game play, laughs. As any spectacular 3d graphical game can be functionality-the-same, re-created as a text adventure game. Skyrim can indeed be created as a text adventure game, as all of those wonderful graphics aren't neccessary at all. And graphics take up much more memory than textual attributes in a text adventure.

if you say: why describe/customize a character's charactertistics, as they're non-necessary for game play,
then one should ask: why describe/customize rooms or whatever objects/things in your game, as well? If a character's "hair color" doesn't matter, than it doesn't matter whether the room is a "dark forest" vs a "radiant glowing city". These room descriptions (including as beautiful 3d graphical artwork/animations) are just as irrelevent to the game play as is describing your character(s) and/or npcs hair color.

For you last paragraph, I mostly disagree... (Which makes dialog and discussion so important on forums like this)
You are you... In real life or in a text adventure...
In most text adventures, "you" are the player and the character. (unless you need to be a dragon for the story, then you need description of what you look like, even if it is just for the story set-up, then never referenced again.) 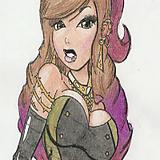 I disagree with this. You can easily incorporate elements into a game that will make these elements important, such as weight and height, or even how other characters refer to your character, like "red" or "blondie" etc. These elements are just as important to the gameplay and immersion as describing the surrounding areas of the character, at least in my experience/opinion.

I think that would be how the other character "see" you...
But that does add some reality to the game.
After all, if you are a redhead, and someone called you blondie, it would make you wonder who the NPC is referring to...

Thanks for all the helpful input, everyone!

Pixie, I checked out your games and I really liked how you did the Sun Queen character creation; including the choices in as part of the text is pretty unique.

I’m starting to think that it isn’t so much what options are included, but how they are used across the course of the narrative. Perhaps the best practice would be to keep the options to the bare minimum of what you need/want and add things in later on after playing the game yourself and getting some feedback from others.

BINGO!!!
I could not have said it any better!
Why have a long drawn out chr gen when 90% is not even used in the game at any time...