I wanted some color swatches to work with when trying to make a game's UI look old-school. While digging around about phosphors and so on, I found what looked like color settings for actual monitors in the classic green, amber, and white. That inspired me to craft the other half of this presentation based on form and sample photos. Here's how it breaks down.

Again, the top three are taken from an image I found that seemed to actually relate to color settings on real monochrome monitors. So, those 16 shade spreads are lifted straight from that image. The suggested color sets in that image were always groups of three colors, two spaces apart, i.e. "2, 4, and 6" or "A, C, and E." However, I decided I'd prefer a slightly wider separation in shades for my use. That's the written portion, my preference for usage. Note that the "Back" color is meant to represent the idea that some monitors did not have any true black, but rather a very dark tone of the display color.

For the bottom three, they all start from this file discussing the Flourescence and Phosphorescence of cathode ray tube phosphors (which I found, of course, in a conversation about monochrome monitors). It has some approximate color samples and lists wavelength numbers. I then used this converter, which says "Wavelength to RGB," but actually gives you html hex codes. Then, I plugged that into w3schools's html color picker, which gives a light/dark scale at 5% increments. Since the low end just looks black, and the high-end all basically turns to white, I used black plus 10–80% for the spreads.

The blue and red sets I constructed based on photos of blue and red monitors in use, using the first three as a pattern to copy. I'm not sure whether the image I was using for blue was genuinely a blue monochrome monitor, however. I suspect it may have been an image of someone using something like DOS shell, or maybe Unix. I'm not super familiar with either one, but I've seen each of them at least once before. The only image I found of an actual blue monochrome was a laptop at an awkward angle, and I didn't feel like the colors were really accurately visible in the photo.

For the violet set, I eye-balled an html percentage spread that looked like a decent match for the others stylistically and gave me the light/dark spread I wanted (without venturing into indigo), and again constructed it using the same pattern. I don't know of anyone ever making a purple/violet monochrome monitor, so that one is pure theory. Amber basically covers everything from brown, through orange, to yellow, so purple was the only part of the rainbow still missing, and I wanted a "complete" variety of color options. I suppose, one could argue that indigo is considered its own part of the spectrum these days, but what I was getting with that starts out looking purple in the dark shades and ends up looking rather blueish in the lighter shades, so it didn't look very "monochrome."

Once I actually produce something with these, I'll post up some in-game images of them. For now, let me know what you think. Do they look about right? I'm rather curious if people think my purple looks like it belongs there, and I'm particularly interested in hearing from anyone who is familiar with the blue and red monitors. I think I saw someone using a blue laptop once, briefly, and I'm pretty sure I've never seen a red one in person before at all. 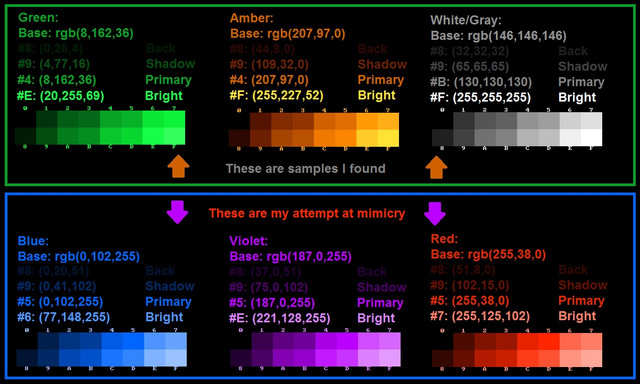 My artistic skills leave much to be desired, but here's a picture of the blue set in a game.