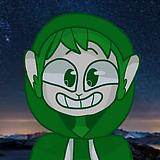 I'm making a dungeon crawl game, but it's space, you have limited oxygen, there's a ship you use to get to other dungeons, and the "dungeons" are overrun space stations.

However, that's not related.

So, if you create an attribute named "O2" for the character or the game, you may tell the Status attribute it will be written on the screen as "Oxygen Level:" and the number after it will be an expression of the "O2" attribute stored in the game, player or aywhere else. Even "O2" itself would be an expressions using the "Stamina" plus "Health" attributes, what when one of those changes, the "Oxygen Level" will also change. The Quest documentation has a recipe for making attributes. But, in fact, the Status Attribute will never be the actual attribute.