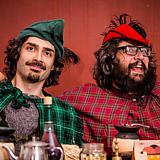 I have searched the web and forums and can't find this. I want to run a script to print a message with a hyperlink to an object that shows the verbs when clicked but i cant find the solution. I'm using the GUI. i don't kn ow how to code. Thanks in advance

In the message, you just put {object:name}. For example {object:hammer}. Note that you put the object's name, but it will display its alias.

It isn´t working. it doesn't show the verb menu

Click on the object in the left side... (tree view)
Click on the Verbs tab...
[+] will add a new verb on your object...
Add your new verb...
On the assignment side...
You can add a message, or create a script that will do some action.

still not. only a dead hyperlink

If the player types in "look objectname", does it work?

At the end of every turn, Quest automatically removes all object links for objects that the player can't currently see. That's the most common reason for a link not appearing.

It does work that way but i need it to work without command bar. The link shows up but nothing happens when i click it

I was just checking, because when someone on here says that a link isn't working, it's normally because the object isn't there, or isn't visible. If it creates a link but the link doesn't work, that suggests a more complex problem.

Do you have the sidebar turned on? If you select the object in the Places & Objects pane, do verb buttons appear? If not, there's something wrong with the GetDisplayVerbs function or one of the attributes it uses. If they do appear, then the problem must be in the frontend.

Hi mrangel! I activated the panes of places and objects and it works from there. and after it interact from there the other link starts working.

I'm trying to figure out how this can happen, but I haven't been able to replicate it in any of my tests.

Can you give a link to a game where this happens?

First i really appreciate your help. The game is in spanish. i cut it down to the link and and object. the link doesn't work till i interact with the object. I uploaded it here http://play2.textadventures.co.uk/Play.aspx?id=yc4fa0synk_aktdbmbitvg

I started a new one and it's working. Don't know what happened

Ah… SetTimeout could be the issue.

At the end of every turn, Quest generates a list of all the currently-visible objects and their verbs. Any links to objects that aren't on the list are hidden, and links that are on the list have the menu generated for them.

This should be done every turn; but sometimes (such as in timeout scripts) it doesn't happen until the player executes a command.

If you print an object link from within a timeout script, you may need to manually force Quest to update the verb links. Like this:

thank you very much. im going to translate it just for your enjoyment. and i post it once it is done. it will be a very short game with the purpose of advertising