We can do silly things like this in Quest 5.8: 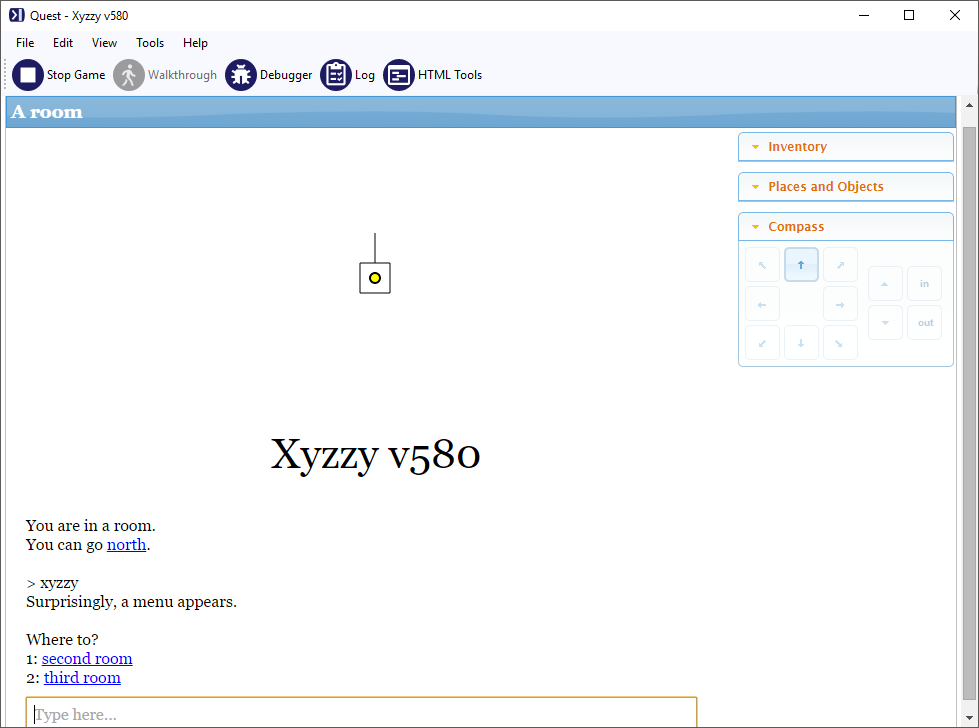 This is not the "classic" XYZZY command. I just called it "real" because it really does something.

Couldn't this be done in the older versions or is it now integrated in Q5.8?

While adding this to 5.8, I searched the project for "AllRooms" in Visual Studio, to make sure I hadn't overlooked anything. I was surprised when some of the search results found the text in the Legacy files!

There was also a RESTART command, which is in 5.8, as well.

To be clear, the new bit is AllRooms. Legacy Quest understood rooms and items to be entirely different, hence a similar function was there.

KV, the ShowMenu function will handle objects in the list. In fact you can do all that in just three lines:

@Pixie
That's exactly what I was about to say :p (though I would have used ListExclude, because I still haven't got into the habit of using the + and - operators on lists)

I tried that first. (In fact, my code was nearly identical.)

I have a room named "second_room" with the alias "second room".

It either displayed "second_room" in the menu (which worked on click), or (after I fooled with the code a little) it showed the correct alias and it didn't work. So, I used this method. (Did I overlook something?)

I don't know what I was doing at first! This works perfectly fine (as Pixie has pointed out):

...but I know that list + objectturns it into the string "one;two;threeobject".