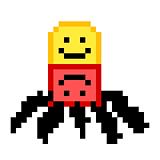 I have a game in mind. It's a game where you find clues. In it, there will be a variable called found, which increases by 1 each time you find a clue. I made a "player object status attribute" called player.found. There is a picture the player can take, and after taking the picture,

But after taking the picture, it displays an error. I guess it's also worth mentioning that the picture is in the bottom cabinet of a filing cabinet. I'm a noob to Quest. In the past I only used Squiffy, where making and setting a variable is very easy. I don't really know how to properly make a variable on Quest.

Anyways, what I wanted to know was why it's not working properly.

If you're using the web version of Quest you can click on add a script, and under variables it should say set an attribute or a variable.

Thanks for the help. I think I managed to figure out the rest. This properly displays the attribute and has the displayed value increases with the real one!

So you have 2 attributes, named player.found and player.Found? Why don't you just use the same attribute in both places?

i wanted to display it like how "score" and "health" is displayed.