Hello all! I’m new to making text adventure games. I’ve made a few basic games in RPG maker but that’s about it. Anyway; I’m trying to figure out how to have different printed text that is dependent on the number of times the player repeats the action.

If anyone could help me out, I would greatly appreciate it.

First off, I would create a new command: kick_cmd.

That way, when you try to kick anything which has no kick script attribute set on it, it will behave like this:

Then, I would add a kick script attribute to my rock object with a script like this: 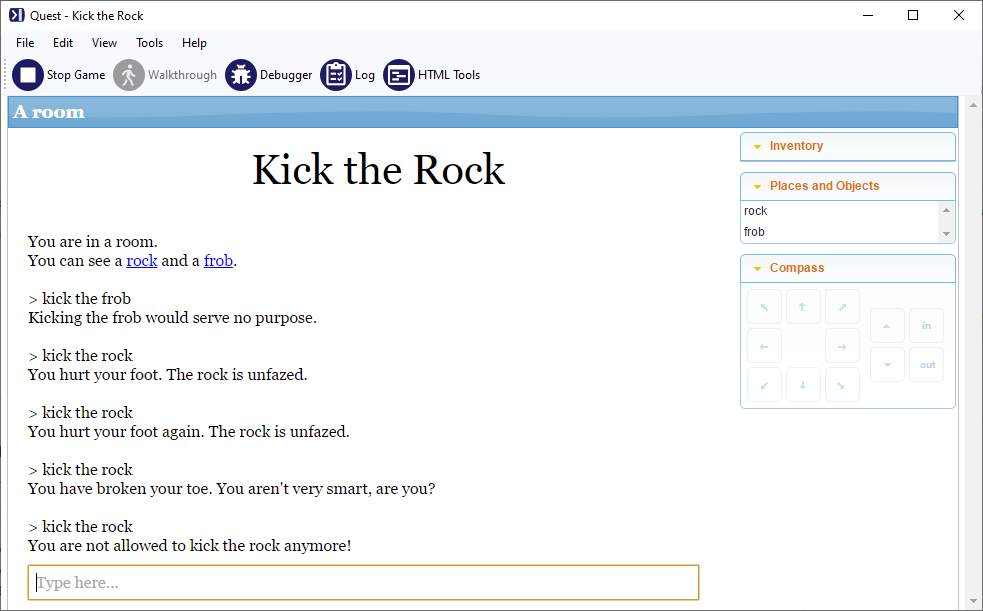 Here is the example game's code:

You can click that and view the code, or you can right-click to save the file and open it with Quest (when using the desktop version of Quest) to see it in the GUI.

If you're using Quest online, you'll have to manually enter everything (and probably copy and paste the scripts).

I avoided using a verb because that would be misleading. The player shouldn't be kicking the rock. Therefore adding a visible kick verb to the rock would be dirty pool.

If you'd rather abuse the player by adding "kick" verbs to objects they shouldn't kick (which might be amusing), it wouldn't be hard to change the kick command into a verb.

There are many ways one could do this. If you don't like this method, just say the word.

Thank you so much KV!
I plan to use and expand upon this basic function to create a variety of humor occurrences.

You are very welcome.

If you are adding a turn count to your game, you'll probably want to suppress the turn scripts in that command script when the object has no kick attribute.

You'll most likely need to tweak all sorts of other things as you add more stuff to your game, too, but learning how to make it all work the way you want is the fun part.

Here is a lengthy explanation that I copy-pasted from my Quest tutorial “game” that never gets any attention so occasionally I have to offer a shameless plug here and there... and I am quite sure that KVs answer is likely simpler and easier to understand but here it is nonetheless. Hope it helps.

•explain room
This is a frequent problem I see on the forums and one that I struggled with for the longest time. Once I figured this out, it is most likely the most helpful bit of coding I have learned. It really opens up gaming options! So, I will try to make this simple.

You will use something like this whenever you want multiple things to get accomplished before it triggers a new event or singular accomplishment. Want to have multiple keys used to open a door? Or, multiple pieces of a password collected before punching in a code? You want to wear multiple different pieces of clothing before you can sneak in to a top secret lab?? This is your answer.

Hello, XanMag! I have seen several excerpts from your book and they really carry a lot of useful information. But unfortunately, you correctly expressed that your book rarely attracts attention. Most likely it happens because you do not know how to write the text correctly in order to attract the attention of people. To write in such a way as to interest a large category of people, you need to have certain skills. Several services that I have been working with for a long time help me to acquire these skills, pay for essays, and they provide services for writing dissertations.

I think it’s more about how I code and solve problems while using quest - not necessarily my literary skill set.