me and my bitchy heart by prajay

Sandpit
Everyone has a love story. A story where the girl is the princess and she waits for his prince charming to come and take her away...far far away from reality. I too had a story, sort of clumsy, sassy but full of ups and down. Some love stories are predictable. Mine was an example. I don't know why in midst of exam, I thought of unweaving my heartache. Pictures are clear right now, flashes fade away with time. I don't want that to happen. Things once left unsaid, remains unsaid forever. You will quench your heart for not collecting the guts to say it at the right moment.
Biggest mistake of my life. I decided to rule upon my heart by following the path laid by my heart. Newly enrolled in second year M.Sc.- Physics program at IIT-I, we called our juniors for an intro. Bunch of delhites popped up...full of zeal and liveliness. Amongst them, a guy asked me " Are you from Delhi "...this was not as noticeable as this " I can't find a proper place to play basketball.
Did he just say basketball... omg a basketball fan? But unluckily I couldn't see him that day. Next day I was trying to score few baskets, suddenly a boy joined the other half of the court. I turned to know his skills. after few moments of constant gaze, he got to know someone is looking at him.
Hey, I'm J.
Me: hi.
J: Actually I wanted to know how to write experiment in the practical file.
I told him all the shit and asked him to play a game. More the number of shots from D and you win !!! Before the game, I didn't have any clue of his being a state level player. Even though he let me win. After half an hour of unbeaten sun, we stepped inside the bus.
J: Can I sit here.
Me: Ya.
And this is how we started our so-called relationship. For more than 45 minutes he carried on with his Delhi stuff. Even though I am a bad listener, he made me hear his entire story.
I felt different that day..as if I have found someone of my kind. His charm was on par - I couldn't resist myself from telling about this gu to my beautiful roommate Sambhavi.
Sambhavi: di, di, control.
Man, I'm on the seventh cloud..it won't be easy for me to land back. After this, my eyes looked for him everywhere. One day later, I found him in mess -eating like a snail, with both eyes and bloody brain fixed on a football match. I had no other choice apart from waiting for my crush. Sonal was my partner in crime- so both of us were waiting for him outside. After 1 hour of wait, he started his stories. This was how I was driving my was way towards him.
Play online
None yet!
Log in to post a review or comment.
Similar Games

Average rating
Not yet rated Written by
prajay 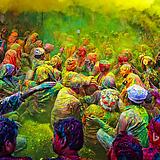