Woo Goes Even Further by longshot

Sci-Fi
You are Doctor Woo and your bizarre space/time craft the BARDIS is malfunctioning. Can you leave the surreal planet on which you have landed and resume your travels throughout the galaxy?

You will meet many characters during your quest, but can you fix your craft before you are arrested for a crime you didn't commit?

Updated and expanded even further (and better). Type 'help' for more information. 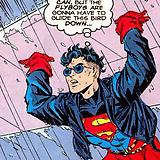 While it is a cute and compelling game, there are a lot of issues with any kind of exploration of the game. Most of the time, there is no scenery. Maybe I'm just too used to games roll with things. There is something frustrating about an interesting thing being mentioned in the description, I ask to look at it, and the game says, "I can't see that."

There are also several points where there discrepancies between the the writing and options. For example:
"You are standing at the bottom of a small hill, which has a cobbled path leading up it to the northwest. A muddy path continues to the east.
You can also see Jack and a cow.
You can go east, southwest or south."
The description goes out of its way to tell me about a path to the northwest, but not only can I not go down in, but when I try to look at "northwest path," "southwest path" or even just plain "path" it says it can't see that.

The process of playing this game felt like an adventure in its own right! I was lured in by rcsjr1951 (aka Cyril) who had become stuck. The author (longshot) was nowhere to be seen, possibly discouraged by having no response (comments or reviews) in the two years that the game had been up on the site. rcsjr1951 had been playing for a while so it took me a few days to catch up (with his help). The journey ahead looked tough, with the possibility of ultimate failure, when we were rescued! Sarah4 appeared, caught up quickly, and shot past to finish the game, nursing us through as well.

For me, inside the game felt more like a 4-star than a 5-star experience. After finishing, however, I've mellowed! There are rough edges in the implementation, but my main quibble was that I had to restart the game several times when trapped in unwinnable positions. The game is fussy about the order in which certain actions are performed, with no clues or warnings about these restrictions. On reflection, however, I now think that most of these may be glitches and perhaps would have been fixed by the author if he/she had had feedback at the right time. The game is of epic proportions so problems are inevitable among the many characters, objects and locations involved. There is certainly a solid 5-star game at its core. The game might also be better if it used the Quest map facility because of the effort needed to draw the map.

Overall, however, even as it stands, this is great entertainment, and I hope someone is able to get a message through to longshot to let him know that his work has finally been recognised.
(5)
Review by sarah4

This was an extensive and well-developped game with a vast area to explore and a large cast of characters to interact with. There were ingenious and fiendish puzzles to solve and, given the challenging nature of the game, completing it was deeply satisfying. I think the game would benefit from some polishing. There are numerous undescribed items and quite a few bugs. On top of this, I feel that there are just too many ways to place the game in an unwinnable state without warning the player beforehand and without them knowing that they have done so until much later. I also think some of the commands could be more flexible and that more hints should be available. These are fairly minor quibbles about a very ambitious and well-executed debut game. Well done on your achievement and I hope to play more games from you in the future!
(5)
Review by rcsjr1951

Excellent game. Fantastic job. Cant believe this is your first. keep up the great work . Look forward to more titles from you.
(5)
Log in to post a review or comment.
Similar Games