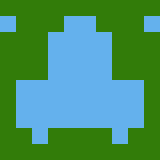 Review for Three Choices.
As the description suggests, this is not a lengthy or involved game. It is, essentially, an interesting arrangement of writing samples. The writing seethes with potential. I enjoyed reading it, which is arguably the most important part. The concepts are relatable and intriguing, and the word choice is cleverly evocative.
However, things like punctuation and verb tense are sloppy. I suspect this was either written very hastily, or perhaps English is not the authors native language. The latter I suspect most due to the reference of "soapy operas" rather than "soap operas." Although that may have been an intentional device that I misunderstood.
It's worth reading every bit of this.

(4)
Review for Safegaurd
It makes a fine proof of concept, I think. In a full version I would naturally hope to see more than two options at a time for the dialogue, and multiple paths to success. I like the idea, and I'm ready for more.
(4)
Review for Adon
Fun and entertaining, but short! Text is clean and well-written if perhaps a bit terse. It's the sort of game with one right path to survival and victory amid many options that lead to untimely death. A fun way to a kill a few minutes time. Sort of like an adventure appetizer.
(4)
Review for Fantastic Finale IV
Interesting little game. Short, fun, gets repetitive. Well put together. I thought there would be more to it, but I'm glad I played it. It's a nifty little nostalgia trip with well-placed humor. Makes me curious to see more from this author.
(3)
Review for Worship the Pig
Worship the Pig is supremely surreal (almost, but not quite, to the point of confusion), much like a genuine dream. Ranging from lighthearted whimsy to vulgar absurdity, it's as if it were co-written by Theodor Seues Geisel and Clive Barker. It takes you on a perilous journey to strange and beautifully described locales in the desperate pursuit of an uncertain goal. The plot is vague and unclear, but it's also captivating and intriguing enough that I couldn't stop reading if I'd tried. In the end, it reveals just enough hints at its meaning to stimulate interesting conversation. In fact, I actually forced my wife to play through it as soon as I'd finished just so we could discuss it.

The game has no input bar or side panels; the player interacts with the story purely by use of hyperlinks. It's an interesting and exciting concept for play, but in this case it left me feeling more like I was reading a book with footnotes than playing a game. There are very few moments where the player can actually make a significant choice about they do, the primary one resulting in a "traditional frustration" of text games.

Despite some disappointment with the interface, I have to say I truly enjoyed Worship the Pig and look forward to any future titles Heal Butcher might release here. I might also take a look at some of his ADRIFT games.

I'm scoring it as 7/10 for QuestComp 2013.
(4)
Review for The Haunting
It is what it says it is, and I enjoyed it. It reminds me of experiences I've had in the past, which provokes some odd feelings and thoughts...cool!
(4)
Review for Captain Jumbo
A provocative look at the perspective of a young child in a dark world, this 'game' provides a lot more to think about than mere entertainment. A fine example of why video games ought to be more widely recognized as art.
Aside from a bug or two, my only complaint is having to go back and forth to get items because you can only carry one at a time. However, even that can hardly be called a flaw as it adds to the feeling of being in the role of the child, and there's not far to go anyway.
Impressive.
(5)
Review for A Cup of Tea
It's good (and surprisingly fun), but there's a couple more things you might consider adding. Since the stove is a container object, the game let me "put teapot on stove" and simply said, "done." But since that didn't heat the water, I was quite confused. Also, I'm accustomed to putting teabags into the cup not the the pot, so that made it hard to figure out. While precise syntax is part of the tradition in text games, it's nice to try and guess what else the wily player might try, and if it's close to the right idea then at least provide a comment that hints at what they need to do differently, or if it's REALLY close just go ahead and give it the same effect. I enjoyed making my tea with/ without the arsenic and condiments, but it would be fun if the difference the milk and sugar made was expressed.
(4)