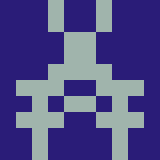 Review for Tiny Thief 0.17 (A shrinking Game)
Really good details and I don't think I dealt with much bugs either. I would love to see more put into the story
(4)
Review for A small hook up V0.1 (NSWF)
This game is amazing, so much detail is put in, I did experience a little glitch using kind interaction on the chair, but other than that no bugs at all! I hope you put more into your game!
(5)
Review for Club Asteria, a size adventure
Got an awesome game going, this game looks so in depth with the choices you make too, haven't gotten to do too many of the sexual stuff in this game asides from work at evening shifts but I could tell there's so much more outcomes to a lot of things already especially depending on your skill levels, I would love to see more!
(5)
Review for Giantess family escape!
Got it off to a good start, keep it up
(3)
Review for Shrinking in Neighborhood
There is a lot of good detail in this game, but there is a big flaw, when I move one direction, I can't just go back, like ever. After I used the staff to avoid being stepped on, I couldn't go further, and after picking up the black device and using it, it didn't do anything but shrink me... when I'm already shrunk and still couldn't do anything after that and it really doesn't help when we don't have the option to type down any commands.
(2)
Review for The Forest
You've got good detail for starting out on the game's first day publishing, but you've also got experience thanks to BOAT and probably other stuff on the side too. Can't wait to see more.
(5)
Review for The Shift (W.I.P)
This looks good so far, pretty well detailed, I hope to see the story progress
(3)
Review for Serban's Sordid Shindig
I love this game and all its features, though as someone with a size fetish, could you include smaller furries too? Like the size of a rodent or even someone who is about 3 inches tall? Overall the game is really good and I hope to see it's updates because there's a lot I want to do on it still
(3)
Review for Sex, Monsters and Video Tape
I'll be honest, I gave up when it didn't let me use the knife to pry the drawers opens, and the grammar could use some serious work, but the idea of monsters and sex intrigues me a lot and I'll be looking to see if this game gets updated later
(2)
Review for Shrunken Accident!
Not a bad start, I'd like to see more interaction with the teacher or go down South and explore some more
(3)
Review for Go on. . . (A Vore Adventure)
I only made it through one pathway so far but I really like it. I met Tayn, he's really cool, but I wish his options would change after meeting him and interacting with him, he seems to be stuck on a repeat of when you first meet him. I only managed to sleep in his stomach and greet him the next morning but that's all I could figure out, If there's anything further I can do with him that I don't know about please let me know, he's a really cool dragon.
(3)
Review for Shrunk In Your Sisters Room!
It's at a good start, maybe let the story play out a little longer, give us more interactions with Mom and Kaitlyn... maybe a some more with the cat too.
(4)
Review for Shrink accident
Please add more when you get the chance, I'd love to see a lot more of this!
(5)
Review for Battle of a Tiny
I love the game so far, hope you add more later, I'd play it again
(4)