Inside the Japanese American Internment by tfickle 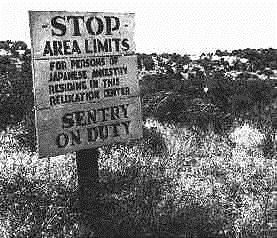 It's 1941, and you're a member of one of the most despised groups in America: the Japanese. This game takes you inside one of the darkest chapters in U.S. history: the Japanese American internment, in which over 100,000 Japanese, many of them American citizens by birth, were evacuated from the West Coast and imprisoned en masse in "relocation centers" across the midwest.

While many people think about the internment as a situation that, by denying internees their most basic civil rights, effectively stripped them of their ability to control any aspect of their lives, this game allows you to realize that in fact the internment was all *about* decision-making. At every turn, internees were bombarded with dilemmas: whether to answer "yes" or "no" to a loyalty questionnaire; whether to join the growing resistance movement or stay quiet; whether to throw one's lot in with one's country or one's race. There were rarely any satisfying answers to these questions; indeed, the very fact that internees had to answer them at all speaks to how profoundly unjust was the government's decision to imprison them.

This game has many plotlines and various endings and pathways; so please consider playing through a few different times. For the content and characters of the game, I've drawn on a broad range of historical and literary sources, especially the Supreme Court case of Fred Korematsu, and John Okada's novel "No-No Boy." In fact, nearly all of the situations which you will face are ones which have actually happened. My hope is that this will allow players to experience a world which is at once mundanely real and terrifyingly strange—just as it was for the internees themselves. In drawing on Okada's novel, especially, I also hope to expose this important literary work to a far larger audience than it currently enjoys. Part of my goal in making this game is to bring the No-No Boy story to life in a more interactive and expansive way. This is why I've retained many of the names and recreated many of the scenes; my goal is not so much to invent a totally fictional account of the internment as to think about how it has already been fictionalized and accounted for, and also to expose people to a different way of "reading" that book in the form of interactive fiction. If you enjoyed this game, please consider reading No-No Boy in its entirety: https://www.amazon.com/No-No-Classics-Asian-American-Literature/dp/0295955252.

In the current version (v1.2), you play as Freddy Suzuki, a 23 year old welder from Oakland, California. My hope is to greatly expand this game so that players can experience the diversity of perspectives and personalities found among the interned population, especially for female, Issei (first-generation, non-American citizen) and Kibei (American-born, Japanese-educated) internees, and in Canada. Ultimately, I'd like to create two different versions of this game: first, the gamebook you're viewing now, and second, a text adventure. Any suggestions, or interest in collaboration, would be most welcome. (This is my first game, so apologies in advance for any bugs!)

Thank you very much for playing.

For an incomplete gamebook, this is a very well written story with historical depth. It's a shame that this hasn't been updated since last November; this has great potential.
(5)
Review by SnarfSnarf

I love it! I've played 3 times and will keep playing until I've reached all endings. Thank you for an awesome game.
(5)
Review by Gary Welch

I made it as far as I could in the game and it's not only scene for scene No-No Boy, but all the characters have the same names. Well, except for Fred Korematsu.
(2)
Log in to post a review or comment.
Similar Games