The Daughters of Megaminded Bizarro (Teen Titans GO) by Newwwwwho

This game was added to the Sandpit for the following reason: Limited audience

This game appears to be written for a small number of people, instead of for a broader audience.

Sandpit
Bizarro's only weakness is blue Kryptonite, created by using the same machine to duplicate green Kryptonite. Though Bizarro acts in what he believes to be the best manner, his Bizarro logic often causes him to act for evil.

That last bit is why Satan knew he was, unfortunately, an easy target.

It works wonders on any afflicted Kryptonian. It does quite the opposite for any member of the Bizarro family. Blue kryptonite appears to weaken Bizarro in the same way that green kryptonite weakens Superman.

Satan pulls out Blue kryptonite, Satan says that "Because if you disobey, small child, I'll kill you!" While holding it to Bizarro's face to weaken as Bizarro cries in pain, alerting an angel fighting a demon.

The angel was Fortunatus who behaved as Bizarro's mother. Fortunatus SMASHED through the Icecream Shop's front window where Satan was and tackled him into the wall.

Fortunatus punched him like THIS. She hit him so hard, the walls cracked.
She pounded on him so hard, you would see fire exploding with each punch.

Satan hit back but nothing happened and she laughed at him, her body was so strong that when HE hit HER, SATAN GOT KNOCKED BACK 6 Feet through the wall.
She ran at him with the speed of the flash and punched him into the ground, creating a crater in the Earth, she used a force shield to keep the force of the punch from breaking buildings successfully.

Her hand got stuck in his face, she tried to pull it out but had a hard time, she tried 6 times and on the 7th, she snatched it out of his jaw. Satan's Jaw had a dent in it.
Satan was somehow still alive and in great pain. Satan just stood up and asked "What the fluff? How'd your spirit-hand get stuck in my spirit jaw?!"

The escape from the forbidden forest

Average rating
Not yet rated Written by
Newwwwwho 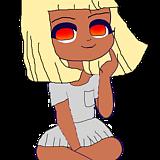