For now you can only go through early kit-hood and halfway trough 1 moon as Ivykit!

Things that are planned :
*Becoming a appentice / med-apprentice.
*Becoming a warrior / med-cat.
*Becoming deputy.
*Becoming leader.
*Becoming a rogue.
*Joining a different clan.
*Dying and joining StarClan / Dark Forest.
*LGBTQ+
*And many more things that will be thought up along the way!

More about the world!
There are 3 clans:
*WillowClan: You start off in this clan. It's filled with weeping willows, ponds and moss.
*RustClan: This clan is situated in a old scrapyard, this clan is mostly made of rogues and is very aggressive.
*MoonClan: A piece of moon fell down onto a big field and now the MoonClan cats live there. These cats are fast and usually have dark pelts.

Credit to: Erin Hunter for creating the Warriors books that this game is based on.

It's a cool game, I love your drawings too! Tell me when its finished uwu.
(4)
Review by Misterfox 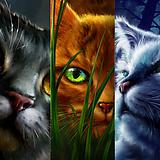 This is an AMAZING game you have to play!!!!!!!!!!
(5)
Review by scarly woods
I love this game a lot and I love that you post weekly, just as I do with my game. I actually just updated my game and I'm looking for editors to help me but no pressure. The more help with editing the better for me, I'm terrible at it, to be honest. Anyway, with all that put aside, I can't wait for it to be update! I've played it a few times even. I'm almost done with my game and I'm always looking for improvements. TY <3

Getting ready for class 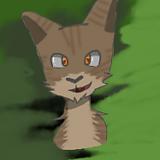